Editor’s Choice: If War Can Have Ethics, Wall Street Can, Too 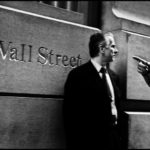 3 de octubre de 2016 – Nearly a decade after one of the most devastating financial collapses in modern history, Wall Street appears as corrupt as ever. Evidence is not hard to come by — most recently, the Wells Fargo scandal, in which employees of the company, spurred by perverse incentive structures, opened two million fraudulent accounts in their customers’ names. The bank had put intense pressure on employees to meet sales goals; some employees who reported the wrongdoing were fired, along with 5,300 more, after the scandal broke. All this is but one reminder of how far major actors in the economy have strayed from any reasonable standard of moral behavior.

Despite the recent urging of high-profile figures like Pope Francis and Senator Bernie Sanders to establish a “moral economy,” we have not. Free-market advocates hold fast to justifications that amount to variations on the “invisible hand” theory of Adam Smith — that the economy is not a moral space, but one that relies on a free and fair market, self-interested (as opposed to selfish) actors and amoral (as opposed to immoral) calculation to arrive at the most efficient and innovative outcomes. The invisible hand of the market must be allowed to act; placing moral limits on the economy, they argue, would hinder this flourishing.

To some, the unbridled force and overarching goal to be pursued is the efficiency of the market, even to the detriment of society, transforming market theory into a sort of divine scripture, to be faithfully followed. The suggestion of a moral economy is decried for the inefficiencies that moral limits would place on behavior in the market. It is as if society exists to serve the market, not the other way around.

The pursuit of a comparative advantage in the market has come to justify nearly any behavior and its consequences. The result of this approach in the United States is already well-known — a staggering level of economic inequality and widespread, devastating effects on millions of citizens struggling against this tide.

Hedge funds and investment banks utilize high-speed trading to place the individual investor at an insurmountable disadvantage. Multinational corporations pump money into political campaigns to influence tax policies that allow them to skirt paying taxes. The mega-wealthy deploy a small army of accountants and attorneys to hide their assets. Slavish devotion to market theories serves as a convenient rational justification for some to take selfish actions they know to be wrong or questionable.

In short, the amoral economy envisioned by free market theory is a fantasy, a theoretical construct that has never really existed in practice. It has been overwhelmed by immoral actors who have turned it into an immoral space, tipping the playing field to their advantage.

So what is to be done? Can the economy be transformed from an immoral space into a moral space?

Some progress on this question can be made by examining how we have chosen to navigate an even more perilous manifestation of the human condition: war. The economy, like war, creates winners and losers, makes heroes of those who seize opportunities and victims of those caught between forces beyond their control, and can transform the fortunes of society for better or ill. Yet, unlike war, the economy has no foundational morality. Instead it leaves critical moral judgments with real consequences in the tenuous hands of self-interested economic actors whose guiding light is the maximization of their own benefit, without consideration for the effects on others.

The Prussian military theorist Carl von Clausewitz warned of “total war” as a theoretical construct in which, by rationally following the escalations of war to their conclusion, war outstrips its strategic logic and becomes irrational, therefore requiring limits in practice. Without limits, Clausewitz argued, theory could be misused to justify and rationalize the unjust and irrational. Unless war is bounded by a higher societal purpose and tempered by what Clausewitz referred to as “the spirit of the age,” it threatens to become its own raison d’être, an irrational end in itself.

In war, immoral action may provide the combatant with a comparative advantage, but it also stains society and humanity in ways that we have collectively deemed to be unacceptable.

Humanity has tried to limit war on moral terms since Cicero first outlined the Just War Ethic, an effort that continues to this day. In war, the reversion to barbarism can be tempting in the heat of battle, and as passions and hatreds rise between peoples. However, even here, humanity has managed to place moral limits.

In the modern world, the Just War Ethic may seem like a distant abstraction; but its effects influence the relationship between war and society in profound ways. Michael Walzer, perhaps the most influential living philosopher of just war theories, articulated the importance of seeking to establish moral principles there: “War is the hardest place: if comprehensive and consistent moral judgments are possible there, they are possible everywhere.”

Of course, the Just War Ethic suffers from a problem: The normative ideal in this case is the absence of war, yet the reality of war precludes that ideal. Therefore, any applied ethics of war are by definition morally flawed. The question for the ethicist then is this: Is it more ethical to make continued (and often ignored) normative pronouncements against the existence of war, or to engage with the temporal reality of war with ethics that seek to limit the cases in which war is undertaken, to moderate its effects, and to guide it toward the normative goal, with the understanding that this goal is not immediately or fully achievable? Obviously, advocates of the Just War Ethic, myself included, come to the latter conclusion.

The question is not one of moral perfection, but of moral improvement. It is a step in the right direction.

If we can seek to regulate war in terms of morality, there is no reason such morality cannot be equally applied to the economy, as Walzer indicates. When faced with illegal or immoral orders, it is the duty of professional soldiers to refuse such orders. When such a refusal occurs, it is followed by thorough investigations, and potentially courts-martial or war crimes prosecutions for those who issue such orders. In the case of the former Wells Fargo employees, the opposite occurred. Imagine the moral and societal hazard if the military permitted such retaliation against those who reported illegal and immoral behaviors.

The principles of a moral economy would seek to curb the market’s more harmful excesses while preserving its societal benefit. Developing fair and just principles to guide a more moral understanding of capitalism may provide a pathway to a more equitable distribution of income and wealth, one that creates more perfect outcomes for society at large.

While the immoral economy has provided advantages to some, it has also stained society and humanity in ways that we are beginning to collectively deem to be unacceptable. The task then is to develop and implement principles of a moral economy which serves the greater good of society.

In a “just” economy, venture capitalists would consider the collateral damage (layoffs, defaulted retirements, etc.) that may result from their actions in the same way that military commanders must consider whether the use of a certain weapon in proximity to civilians would be discriminate and proportional. Chief executives would begin to care for their employees and their families the same way that professional military commanders care for their troops and their families. The promise of these outcomes, and society’s growing dissatisfaction with the current reality, makes this a conversation worth having.

Some might argue that we already have laws and regulations to perform these functions, but these have, at times spectacularly, failed to maintain the market as a truly neutral, free, and fair space. In a theoretical sense, law should approximate the normative ideal in the real world. Yet, in economic thought we have no normative ideal, no foundational morality. We have economic ideals derived from market theory, but these are not tempered by a coherent set of ethical ideals, allowing the market’s worst excesses, and resulting in many of the morally troubling outcomes produced by the economy. We need better laws and regulations, but first we must establish a foundational morality to guide their development.

To demand moral perfection or to succumb in the face of seeming futility is to turn our backs on what can be achieved by acknowledging both the ideal and the limits of reality. Applied ethics guide our interactions in the world as it exists while nudging us incrementally closer to the normative ideal and the world we seek to create.

War is inherently unjust, but the Just War Ethic has made it more just. The economy is not moral, but a foundational ethics of the economy could make it more moral. The product of such ethics would be decidedly imperfect, but it would be better than no ethics at all.